Have you ever taken the time to think about the relation you hold with the food you eat every day, with the food nature is providing us human beings, the food which is grown for us by other members of society? To really understand one’s relation with food I engaged with urban dwellers in Dresden, Germany who are already in one or the other way deeply connected with food. Through focus groups I aimed to discover and experience their individual relations but also to see how the urban environment can help and sometimes even hinder us to follow the sustainable ways of consumption we are striving for. This interrelation between city dwellers as individuals and the urban environment, institutional structures and the overruling food system is thereby crucial to understand not only current ways of consumption but also to discover transformational paths towards more sustainable and just choices in food consumption. Choices which are not only good for us so that we feel nurtured and happy but also choices which are good for nature and nonhuman animals.

As Hartmut Rosa says in his theory of resonance the "world-relationship (...) goes not least through the mouth" (Rosa, 2019, p. 103). The "world is therefore incessantly and quite literally processed through our bodies. There is no more elementary and no more porous form of the world relationship." (Rosa, 2019, p. 100). Still, consuming food is very often a necessity we have to follow up on during stressful working days. Even though eating and the relation with food is one of the most natural relations we can have with nature and our own body, current western lifestyles do not give us the freedom to indulge in this relation to truly experience our intuition in following a healthy, just, and delicious diet. Expensive organic products, highly produced food, fast food restaurants on every corner, ideals of beauty, absurd amounts of sugar and meat everywhere and every day, those circumstances do not make it easy, natural, or intuitive for an individual to engage in a responsive relationship with food.

Workshop environment and catering at the Palais Café und Garten 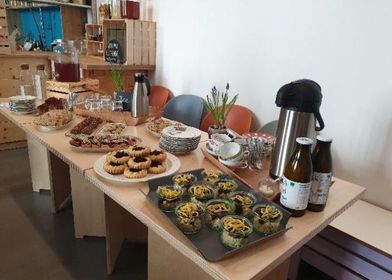 Still, there are already a lot of people who are somehow able to (re)connect with the food they eat. Those individuals were invited to the focus group workshops at the wonderful zero waste Palais Café and Garden in Dresden supporting my first empirical phase to get an idea of what urban human-food resonance could mean. By distributing flyers at organic supermarkets, in vegan and vegetarian cafés and restaurants but also sending invitations to local projects and associations in Dresden, which root for more sustainably ways of food consumption in the city, I was able to specifically address the desired target group. In those workshops many questions were asked guiding the participants from their inner to their external dimension. Smaller interventions were included as well to bring the participants into the right mood, to help them focus and creatively think and feel about their individual urban human-food relations.

In that regard, the first phase of the workshop did not only address supposedly superficial motivations for sustainable diets such as the ecological and social impacts of the current food system, but we were able to address our inner dimension. What affects, what touches, shakes, and moves us when we think about our own choice of diet but also when we think about the general way food is produced, transported, and treated in the highly industrialized part of this world? Mara* did thereby say for instance:

"Sometimes, it is so with certain stores...one is speechless. The masses that are given away there. The masses. And why do we live in such a world? That makes me so angry that in principle everything must always be there. The supermarkets have to be stocked at every time so that people have the feeling they always get everything. That makes me angry. This availability, it leaves me speechless. Really speechless."

The masses of food waste, the permanent availability of every thinkable food product was discussed in many focus groups. However, the participants did also refer to the horror, animals have to endure to become our food and the impacts those ways of production have on the environment. The discussants referred to the social injustices and unbelievable working conditions in food production, the hunger many human beings are still suffering from and simultaneously the vast amount of ignorance and egoistic behavior of privileged members of society when it comes to their consumption patterns. The engaged focus group members were thereby also able to pin down specific feelings and emotions as well as to focus on transformational experiences, moments, and encounters which paved their way towards a more sustainable relation with food touching already on many aspects around the external dimension. Eloise said for example:

"I have read the book Eating Animals. I think that was eight years ago, and when I read it back then, I was kind of shocked. I mean, somehow I was already familiar with photos of factory farming and it never seemed to have affected me that much before, but to read it and to deal with it for weeks was kind of extreme. And then I became a vegetarian."

"I think for me what has been a total sticking point when I started to cook for myself, because I find it a difference for me whether the meat is still raw or already cooked. I remember clearly that at some point I think the first time I made a goose or a chicken. And I was incredibly disgusted and couldn't touch it because I feel like there's naked dead in front of me."

"So I think with me it wasn't a single point, but rather the influence of people in my environment, whether it's my grandmother who grows everything in her garden and boils it down and has a whole cellar full of jam or my mom who always grows tomatoes or a friend who has become a vegetarian and then I became a vegetarian myself. I think with me it's just ...not necessarily dependent, but I've been influenced a lot by people in my environment."

Collection of emotions of the participants regarding the inner dimension 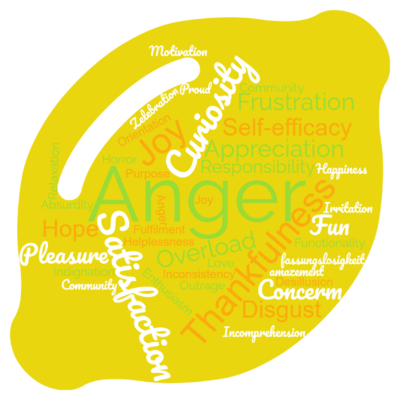 In the second phase, the focus was on external factors that influence the way we eat. The participants were asked how they obtain their food and for what reasons they choose exactly this type of food procurement. Who or what supports them in their current diet and who or what kind of structures make it difficult to stay true to their choice of diet? While talking about the urban infrastructure, the availability of sustainable alternatives while shopping but also local initiatives and events providing information and fun ways of connecting with food were addressed quite often. What kind of supermarkets are in close proximation or is there a food sharing distributor station close by? But also, the usage of space in the urban environment was discussed which often does not easily allow for sustainable ways of consumption, for example the lack of green spaces for urban gardening. Here Lola pointed out:

"What makes it sometimes a bit difficult for me...I did say earlier that it's much easier to eat sustainably in the city, but I think it always depends on what's important to you and I think that in the village, for example, there's much more space for people, there's much more space to grow things yourself, for example. There is much more space for neighbors with chickens or so, where you can get your eggs or whatever. Or maybe there is a dairy farmer in the village where you can get really fresh milk. If it is available, the food from the village is just so much cooler, because then you really know where it comes from. I just don't have that in the city. So here there is simply no agriculture in the middle of Dresden, there are no dairy farmers or so, it's all in the villages around."

The external dimension did also put social relations in focus. They were seen as beneficial aspects in the lives of the participants where family members and friends supported their choices of food consumption, cooking vegan meals, and trying new things. But pretty often as well, the social environment was seen as a stressor. Participants´ values, worldviews, and choices were and are often questioned. Some felt guilty and frustrated and get thereby pushed to adapt to common ways of consumption to not disturb the somehow scurrile normalization of the brutal conditions in meat production for instance. Those ups and downs, those obstacles but also ways of support offered many interesting points for transformational interventions. Here, Jodie said:

"It does actually play a role for me that I am also in such a bubble, where many people eat consciously and where I don't have to have a fundamental discussion every time why I don't eat meat or why we as friends cook instead of getting stuff from the freezer and throwing it in the oven, because that is so normal and of course that makes it easier for me to just go through with it, because I don't have to justify myself every time. Yes, it has become such normality. That's just nice." 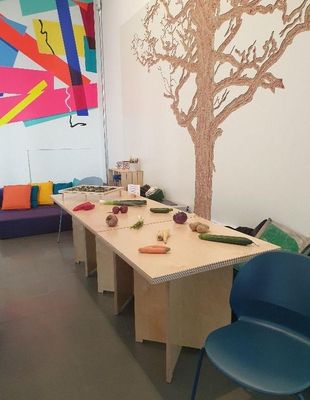 The different interventions used during the workshops sparked some fun and deep moments in the diverse focus group conversations. By choosing vegetables at the beginning for the introduction round, participants related to some childhood memories for example. The guided meditation in between inspired a focused but also calm atmosphere enabling me as a quiet observer to see the participants fully indulge in that particular moment. At the end of the workshops the participants were asked to choose a postcard to write down the most important aspects of a sustainable human-food relation in the city, to reflect on what they have experienced in the workshop, and what they have learned about themselves and others. Those postcards were taken home as a little reminder that the workshop participants really took the time to think about the relation with the food they eat every day, with the food nature is providing us human beings, the food which is grown for us by other members of society.

Those workshops made my heart feel light. Every each and one of them was unique, the people were so open and good with each other. It gave me a lot of hope, motivation, and drive but also an inner satisfaction and calmness with my personal choice of food consumption and with the research I am privileged to do. In that regard, Philipp said:

"The moment I start to think about and feel like I'm a part of something. There is actually not much room than to look at...what am I eating? How do I move around? How do I experience myself within this world as a part of it? And that process, which also means personal maturity, is the biggest driver."

If you have any comments or question on the essay, feel warmly invited to contact the author (m.killingerioer@ioer.de).

* All participants’ names are pseudonomyized

Moving from crisis to resonance: A summer cinema

The need for self-efficacy in times of powerlessness.
Caring for nature in the city.

The unavailability of the own voice. What does Amos really want to "say"?

Flötenspiel (1940) by Hermann Hesse: A resonance-specific analysis and embedding in the sustainability context

Inside me ‒ inside us

Responsive relationships:
The treasure of vulnerability

Christmas ‒ eating in the spirit of the feast of love?

Nurturing our relation with nature and ourselves in the dark season